There have already been a lot of changes at Twitter since its floatation last month, and now the social network is making a move into the local search market. The new Nearby stream allows users to see what is going on in their local neighborhoods by reading tweets made by people who are registered as living in the same area. Though most of the focus so far has been on the social possibilities this opens up, it has enormous potential for businesses.

Twitter users have been able to register their location since 2010; however, all this did previously was help to make them more identifiable. Twitter is now able to take this pre-existing information to launch its new service. Though Nearby may raise concern for some users who value their privacy, it seems likely that it will remain an opt-in service. Twitter is still reeling from the outcry that followed changes to its block function, which it changed back within five hours; it is unlikely to want to upset those users again, especially in relation to matters of personal security.

One of Twitter’s weaknesses has been its difficulty in directing relevant content to readers beyond the content they actively seek out and subscribe to by following others. Trends are not guaranteed to have any relevance to individual users, but Nearby is likely to include content that is highly relevant. It can help people to find out what is going on if they see a parade going past their windows, make new friends they can meet up with in person, and get useful tips on things such as local sales or where to find cool products.

For businesses, the best thing about Nearby is that it will allow them to reach local prospective customers at no additional cost and with very little effort – simply tweeting as normal should result in messages popping up where they will be noticed. This will not only help with the targeting of what will be, for many businesses, a more relevant set of readers but will also make it much easier for businesses to attract new followers.

From Twitter’s point of view this could attract a lot more business users, with the potential for these users to become sources of revenue as Twitter develops other parts of its systems. Going local may also help Twitter to gain some ground on Instagram, which has now overtaken it in the popularity stakes for users on mobile devices. 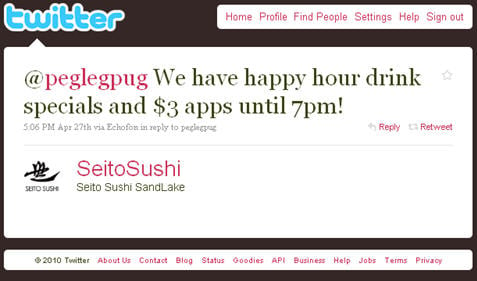 How to Use Twitter to Grow Your Customer Base